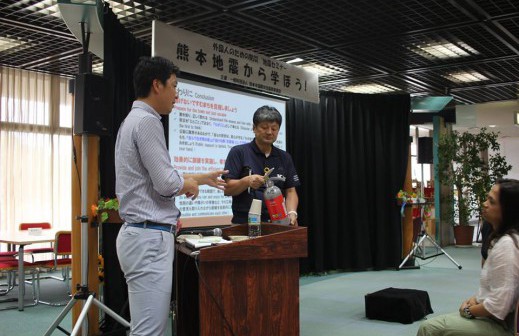 On July 16th 13:30 to 16:30, JISP held a disaster preparedness seminar for foreigners in collaboration with the Kumamoto City International Centre. About 35 to 40 participants living in Kumamoto came from various countries such as Bangladesh, Philippians, China, and Japan.
Before the sessions started, three participants from Sri Lanka, the Philippines, and Bangladesh shared about their experiences of the Kumamoto earthquake. Their experiences varied. While some noted that they felt left out and lonely after the earthquake, others felt overwhelmed by the help of volunteers. All in all however, the experience was a frightening one highlighting the need for disaster preparedness not only for foreigners but also Japanese.
As the sessions started, the participants learned about the mechanisms and risks of not only earthquakes, but also Tsunamis and Volcano eruptions. These could occur again in Kumamoto as there are many plates clashing each other and a volcano in the area. In the session they learned how earthquakes occur and how the size of the earthquake is determined not only by the magnitude (energy) of the earthquake but also affected by the type of soil and building structures. As for tsunami, they learned that these could occur even when the earthquake is far and away from where they lived, as in the Chili earthquake in 1960 in Kesenuma town in Miyagi prefecture. In the second half of the lecture, the participants learned how to be prepared for natural disasters through the ten rules of safety, and the 10 rules of preparedness. They learned the importance of protecting oneself before helping others and as well as not to leave a building immediately after the earthquake.